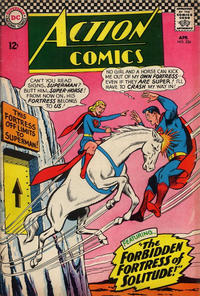 Yes, I was foolish enough to release that villain from the Zone.

Appearing in "The Man From the Phantom Zone!"Edit

Synopsis for "The Man From the Phantom Zone!"Edit

Superman releases Phantom Zone prisoner Ak-Var after his thirty year sentence has expired. Ak-Var is then sent to Kandor where most of society shuns him for his criminal past. Three members of his old gang remember him, but they are much older now since Ak-Var did not age while in the Phantom Zone. Soon Ak-Var's former associates exhibit super powers and commit robberies. Ak-Var claims that he is innocent, but his former friends frame him. Superman returns to Kandor and helps Ak-Var clear his name by exposing the real crooks. He also explains that the super powers were the result of Ak-Var's exposure to Red Kryptonite, which caused him to transfer powers to other people.

Appearing in "The Forbidden Fortress of Solitude!"Edit

Synopsis for "The Forbidden Fortress of Solitude!"Edit

Supergirl seeks a cure for the disfigurement she suffered at the hands of Jak-Thal. Superman fails to find a solution, so Supergirl resorts to wearing a mask. After helping a soldier through plastic surgery to restore his face, Supergirl flies to Bizarro World to stop an interplanetary collision. Supergirl's appearance is considered beautiful on Bizarro World. The Bizarros create and imperfect duplicate of her, which results in a Bizarro-Supergirl with a pretty face. The Bizarro-Supergirl flies to Earth and plays a trick on Superman by keeping him out of the Fortress of Solitude.

The real Supergirl then returns to Earth where she dodges Dick Malverne since her appearance is embarassing. When he requests a photo, Linda puts on a mask and her crown to oblige him. After Dick leaves, Linda discovers that Jak-Thal created an antidote and placed it in the crown. When Linda put on the crown, her face was restored.

Retrieved from "https://heykidscomics.fandom.com/wiki/Action_Comics_Vol_1_336?oldid=1504119"
Community content is available under CC-BY-SA unless otherwise noted.