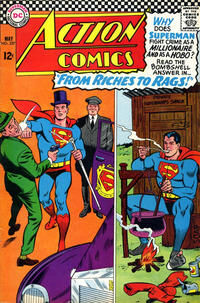 Buddy, can you spare a dime?

Appearing in "From Riches to Rags"Edit

Synopsis for "From Riches to Rags"Edit

Superman falls under a strange compulsion to take on various roles while performing his duties. He stops a crime while acting as a rich man, pretends to be poor to elicit government support for a slum project, captures two thieves while dressed as an indian chief, impersonates an attorney to stop a killer, and fakes an operation on Clark Kent acting as a doctor.

Superman then warns the FBI that he will commit a theft. Agents set up a Kryptonite trap, but Superman outwits them by stealing the Kryptonite. After disposing of the Green K, Superman returns and offers an explanation. He explains that the compulsion was caused by a nursery rhyme: "rich man, poor man, beggar man, thief, doctor, lawyer, indian chief". As a child a Kryptonian comet appeared in the sky while he was saying the rhyme. A hypnotic effect caused him to assume the roles when the comet reappeared.

Appearing in "The Green Sun Supergirl!"Edit

Synopsis for "The Green Sun Supergirl!"Edit

A spacecraft Supergirl is testing for the U.S. government deposits her on Lumal, a planet under a green sun, where she has no super-powers. Supergirl helps the people of Lumal triumph over their oppressors, the Evil-Eyed People. She improvises with equipment from the spacecraft, causing the Lumalians to think she has super-powers. Later, Supergirl manages to find radioactive material and uses it to power the ship back to Earth.

Retrieved from "https://heykidscomics.fandom.com/wiki/Action_Comics_Vol_1_337?oldid=1396637"
Community content is available under CC-BY-SA unless otherwise noted.