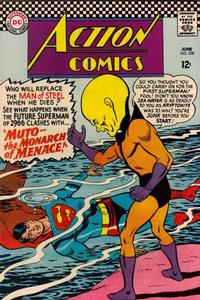 I'll admit that was my first reaction when I learned you destroyed Krypton! But that charm of yours got a grip on me... And even I'm not invulnerable to cupid's arrows!

Appearing in "Muto -- Monarch of Menace!"Edit

Synopsis for "Muto -- Monarch of Menace!"Edit

Muto returns with a plan to kill his greatest enemy, the Superman of 2966. Muto raids a planet containing the greatest weapons in the universe. Superman falls for a decoy which lures him away, allowing Muto to escape. Superman tracks Muto and spots him starting a flood. The rushing water endangers three children. Superman tries to rescue the children, only to discover that they are androids. The flood waters engulf Superman exposing him to his only weakness, atomic fallout in the sea water.

Appearing in "The Villain Who Married Supergirl!"Edit

Synopsis for "The Villain Who Married Supergirl!"Edit

Raspor and Viperie, two desperadoes from outer space, make Supergirl's acquaintance. Raspor wishes to marry Supergirl, despite Viperie's protests. When her voice becomes too strident, he exiles her to the Nightmare Dimension. Raspor also boasts that he placed an N-Bomb in the core of Krypton, which destroyed it. Supergirl, in vengeance, pretends to be in love with him and arranges a mock "wedding", but leaves him stranded on a planet on which she claims to have placed an N-Bomb with an indefinite timer. Later, she admits to herself she was lying about the bomb, leaving him exiled on the planet in fear of impending death. And, to himself, Raspor admits he was lying about planting a bomb in Krypton.

Retrieved from "https://heykidscomics.fandom.com/wiki/Action_Comics_Vol_1_338?oldid=1503979"
Community content is available under CC-BY-SA unless otherwise noted.