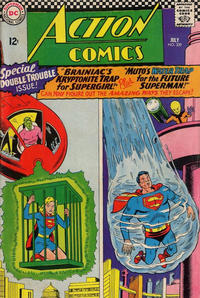 Appearing in "Muto versus the Man of Tomorrow!"Edit

Synopsis for "Muto versus the Man of Tomorrow!"Edit

The Superman of 2966 escapes a water trap set for him by Muto with the help of three android children. He then helps the Atlanteans defeat one of Muto's lieutenants threatening Atlantis. Muto then uses a growth ray to enlarge the people of Metropolis to gigantic height. Superman restores them to normal before his confrontation with Muto. Having deduced Muto's weakness, Superman is able to open a space-warp capable of sending Muto back to his home dimension, and hopes that the villain never returns.

Brainiac comes to Metropolis for a battle with Superman, but the Man of Steel is in outer space on a Justice League mission. Thus, Supergirl stands in for her cousin and battles Brainiac, who almost destroys her at one point with a cage of Kryptonite. Being smaller than Superman, she slips between the cage bars and forces Brainiac to escape by sending himself into another time-era. When Superman returns, he compliments Supergirl on her victory.

Retrieved from "https://heykidscomics.fandom.com/wiki/Action_Comics_Vol_1_339?oldid=1396639"
Community content is available under CC-BY-SA unless otherwise noted.