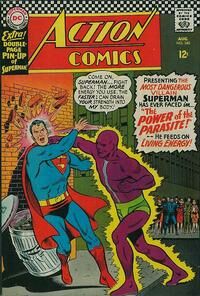 My power will sap your energy, Superman, leaving you weak & helpless! While I become invincible... invulnerable... immortal!

Appearing in "Power of the Parasite!"Edit

Synopsis for "Power of the Parasite!"Edit

After Superman finishes an experiment with radioactive materials, a lab assistant, Jensen, is assigned to dispose of them. Jensen opens the container and is irradiated by atomic particles. He soon discovers that though disfigured he can drain energy from people.

Jensen plans to use his new powers for crime by stealing the power of Superman. He visits a construction site where the Man of Steel is scheduled to attend and begins draining Superman's energy. In so doing, Parasite discovers Superman's secret identity. Despite Superman's efforts to fight the Parasite he continues to grow weaker. Finally the Parasite draws more of Superman's power than his body can contain. Parasite seemingly explodes into nothingness.

Appearing in "The Supergirl Identity Hunt!"Edit

Synopsis for "The Supergirl Identity Hunt!"Edit

A blackmailer called the Fact Finder takes the opportunity to search for Supergirl among the women attending a reunion at Midvale Orphanage, since his research indicates that Supergirl once lived there. He and his gang eliminate various ladies as suspects. But, with the help of Superman, Linda Danvers fakes getting a tooth pulled. Since Supergirl would never need dental work, the gang turns on Fact Finder and denounces him as a boob.