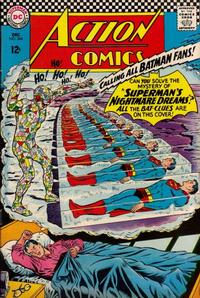 After an experiment in which his mind is briefly put into Batman's body and vice versa and a brief exposure to Red Kryptonite, Superman has recurring dreams which symbolize Batman, Robin, and their arch-foes.

Appearing in "The (Super) Girl in the Green House"Edit

Synopsis for "The (Super) Girl in the Green House"Edit

In space, Supergirl comes upon Gaea, a parallel version of Earth. On Gaea, a plague has wiped out most adults, leaving teenagers in charge of government and society. Supergirl decides to stay for a while, having two months off from college. She establishes her Linda Danvers identity and also appears as Supergirl. A chain of events leads to Linda becoming president of Gaea's America as a write-in candidate. However, she is also targeted by the Adult Revolt Movement, whose crack agent, Dick Malvin, is a dead ringer for Dick Malverne of Earth. Supergirl becomes wanted for unwittingly attacking policemen and placing fool's gold in the treasury. When Malvin tricks Linda into exposing her Supergirl identity, she is scheduled to be impeached.

Retrieved from "https://heykidscomics.fandom.com/wiki/Action_Comics_Vol_1_344?oldid=1396644"
Community content is available under CC-BY-SA unless otherwise noted.