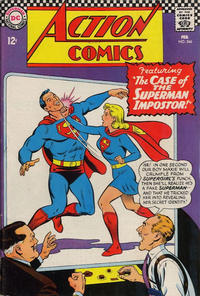 Appearing in "The Man Who Sold Insurance to Superman!"Edit

Synopsis for "The Man Who Sold Insurance to Superman!"Edit

An insurance salesman sells Superman a policy guaranteeing $100,000,000,000 against his death or disappearance from the Earth.

Appearing in "The Case of the Superman Imposter!"Edit

Synopsis for "The Case of the Superman Imposter!"Edit

Clark Kent appears to summon Superman to take in the Torpedo, a mad bomber. But a criminal mastermind called the Professor deduces Kent is Superman, and intends to blackmail Supergirl with an elaborate plot. First, the Professor's hireling Maxie is made into a double of Superman and Clark Kent by plastic surgery. Then, as "Superman", Maxie tricks Supergirl into switching identities in front of him. The Professor's gang blackmails Supergirl, telling her that they will reveal her double identity to the world unless she brings them riches. Supergirl almost succumbs, but, at the last minute, refuses, unwilling to become a thief even to protect herself. The Professor and his gang take off in a car, with Maxie disguised as Clark Kent. Unfortunately for them, the Torpedo has broken jail, sees Maxie as "Clark Kent", and throws a bomb at them, blowing the Professor and his gang to bits.

Retrieved from "https://heykidscomics.fandom.com/wiki/Action_Comics_Vol_1_346?oldid=1396708"
Community content is available under CC-BY-SA unless otherwise noted.