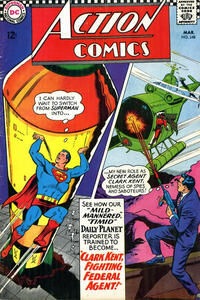 To nail an enemy agent called the Acid Master, the FBI turns to and trains an outsider, Clark Kent, not suspecting he is Superman.

Appearing in "The Assistant Supergirl!"Edit

Synopsis for "The Assistant Supergirl!"Edit

In return for her saving their race from starvation, the people of the planet Denek send Supergirl a robot double named Kara Strange. The robot is programmed to help Supergirl in both her identities, and can assume the appearance of both Linda and Supergirl. However, the robot turns out to be too good a helper, causing Linda much consternation. But, when Linda orders Kara Strange to do everything in her stead one day, the robot fails one test--giving blood. Sadly, Kara Strange packs up and flies off of Earth, back to her homeworld.

Retrieved from "https://heykidscomics.fandom.com/wiki/Action_Comics_Vol_1_348?oldid=1483119"
Community content is available under CC-BY-SA unless otherwise noted.