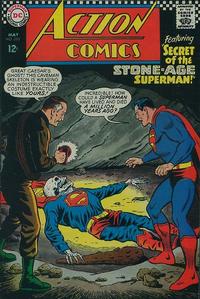 Appearing in "The Secret of the Stone-Age Superman"Edit

Synopsis for "The Secret of the Stone-Age Superman"Edit

To solve the mystery of a caveman skeleton in a Superman suit, Superman goes back over a million years into the past.

"Fingers" Cooley and his gang dress as Green Arrow, Green Lantern, Batman, and Supergirl in a rock band called The Heroes. They use this as a cover for robberies, which the rest of the gang commits in the wealthy homes in which they play while Kim Lorne, the Supergirl impostor, does a solo set. When Kim learns of Cooley's thievery of a scientist's military secrets and mineral collection (including a powerful variety of Kryptonite), he threatens to have her parents harmed if she goes to the police. Supergirl, investigating the thefts, hears Kim's confession. When the crooks immobilize Supergirl with the Kryptonite, Kim rescues her. Supergirl then summons the real Green Lantern, Green Arrow, and Batman from Justice League headquarters to capture their crooked counterparts.

Retrieved from "https://heykidscomics.fandom.com/wiki/Action_Comics_Vol_1_350?oldid=1396712"
Community content is available under CC-BY-SA unless otherwise noted.