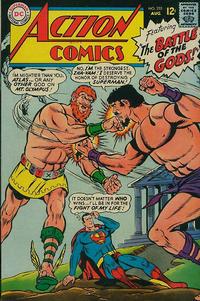 Appearing in "The Battle of the Gods!"Edit

Synopsis for "The Battle of the Gods!"Edit

Superman goes back in time to ancient Mount Olympus, where he witnesses the Delphic Oracle prophesying the advent of the Man of Steel. Jealous that they will be forgotten in favor of Superman in the future, the deities of Olympus create a being with the powers of Zeus, Hercules, Apollo, Vulcan, Achilles, and Mercury, and call him Zha-Vam. They also equip him with the belt that can summon the powers of other mythical gods and heroes, and send him to the future to battle Superman. But the Kryptonian hero persuades Neptune to make him a power-belt akin to Zha-Vam’s, and uses it to summon Atlas to help him defeat the villain. He then takes Zha-Vam back to ancient Olympus, where Prometheus turns their champion back into lifeless clay.

Appearing in "The Cosmic Collectors!"Edit

Synopsis for "The Cosmic Collectors!"Edit

When Linda Danvers notices so-so student Joe Trent checking out weighty scientific tomes, with no affect on his grades, Supergirl investigates. She discovers that Joe, under a hypnotic spell, is bringing the books to a spacecraft inhabited by the Living Library, a group of disembodied brains from the planet Zorkia. The Library's mission is to scan all the books in existence and serve as a living repository of knowledge on Zork. However, they judge that Supergirl's super-memory would make it possible for her to retain all their knowledge in her stead, and allow them to get back into their bodies, which have been kept in suspended animation. Thus, they use Kryptonite to keep Supergirl prisoner, and she serves as a "human library" on Zorkia.

Retrieved from "https://heykidscomics.fandom.com/wiki/Action_Comics_Vol_1_353?oldid=1396715"
Community content is available under CC-BY-SA unless otherwise noted.