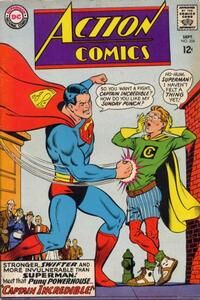 A scientist of the 27th Century creates a super-robot named Captain Incredible, with powers that exceed those of Superman, to be his aide, but the stress of traveling back to the 20th Century turns the robot into Superman’s enemy.

Supergirl, on Zorkia, learns from King Cerebron, another disembodied brain, that his race was a conquering, warlike people, but they were forced to abandon their bodies when a race of fish-people retaliated with a "plague-mist" that was deadly to human life. Their real quest has been to find an antidote to the plague-mist. Supergirl, though held prisoner by threat of the Kryptonite, refuses to solve their problems. However, they trick her into using her super-powers, duplicate them, and infuse them (including invulnerability) into Queen Neolla, Cerebron's wife, who has been kept in suspended animation up to this time. Cerebron hopes Neolla will rid them of the plague-mist and help them conquer other worlds. But she has absorbed Supergirl's heroic nature, causing her to free Supergirl of the Kryptonite trap. As Supergirl leaves, Neolla tells her that she will only work on an antidote to the plague-mist when Cerebron and his people foreswear their dreams of conquest.

Retrieved from "https://heykidscomics.fandom.com/wiki/Action_Comics_Vol_1_354?oldid=1483123"
Community content is available under CC-BY-SA unless otherwise noted.