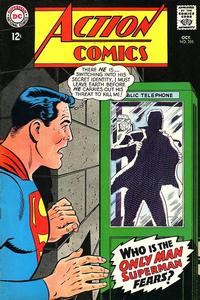 Appearing in "The Mighty Annihilator!"Edit

Synopsis for "The Mighty Annihilator!"Edit

Carl Keller, a prisoner in an Iron Curtain camp, blames Superman for his plight. He discovers explosive chemicals from Krypton in a crashed rocket, gives himself superhuman power by ingesting them, and comes to America. There he becomes Annihilator, a costumed super-villain, and threatens to destroy the Earth and Superman with it if the Man of Steel opposes him.

Retrieved from "https://heykidscomics.fandom.com/wiki/Action_Comics_Vol_1_355?oldid=1483124"
Community content is available under CC-BY-SA unless otherwise noted.