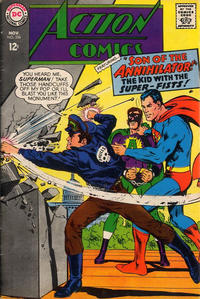 Appearing in "The Son of the Annihilator!"Edit

Synopsis for "The Son of the Annihilator!"Edit

Superman finds himself unable to oppose the Annihilator, who adopts a juvenile delinquent, Pocketbook Pete, as his “son”. However, Superman soon learns that the Annihilator’s powers have worn off, but Pete, who has taken a dose of the explosive chemicals, now possesses the same powers.

Appearing in "The Girl of Straw!"Edit

Synopsis for "The Girl of Straw!"Edit

Supergirl's powers have been steadily slipping away, and not due to Kryptonite exposure. When she is rescued by Superman, he tells her what he has been keeping secret from her for so long: she is really an android created by Zor-El, sent to Earth to become Superman's helper, and now her power-source is burning out. She flies away in tears, but soon falls to her destruction. Superman wakes up. It has all been a dream, he thinks...until he sees Supergirl's smashed android body where he dreamed it fell... Linda Danvers wakes up. It has all been a dream within a dream.

Retrieved from "https://heykidscomics.fandom.com/wiki/Action_Comics_Vol_1_356?oldid=1483125"
Community content is available under CC-BY-SA unless otherwise noted.