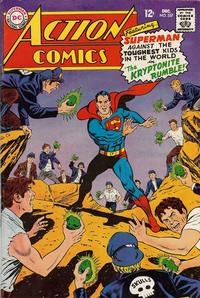 Appearing in "The Kryptonite Rumble!"Edit

Synopsis for "The Kryptonite Rumble!"Edit

The Annihilator and his “son” take over Washington, D.C., but the former discovers that the Kryptonian chemicals are weakening his heart, even as Superman embarks on a desperate plan to defeat them both.

After Supergirl rescues the inhabitants of Zhonnia from a blazing sea of oil, Thal, a Zhonnian, falls in love with her and breaks off his engagement to Veena, his fiancee. To get Thal over his infatuation, Veena dresses as a man, takes the identity of "Joaquin Jarl", comes to Earth, and convinces Supergirl she has been married to "Joaquin" for a year. Her memory of such, says "Joaquin", has been wiped out by a recent Kryptonite exposure. Other Zhonnians, including Thal, are invited and come to Supergirl's and "Joaquin's" first "wedding anniversary." While there, Thal admits that hearing of her marriage makes him wish he had Veena to make up with. Supergirl, who has deduced Veena's true identity from feminine mannerisms she failed to cover up, unmasks her in private, gets the two lovers together again, and attends their subsequent marriage.

Retrieved from "https://heykidscomics.fandom.com/wiki/Action_Comics_Vol_1_357?oldid=1483126"
Community content is available under CC-BY-SA unless otherwise noted.