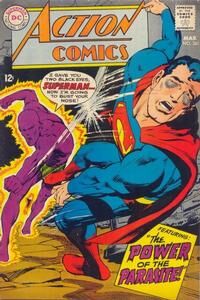 He's dead! I stole too much of his energy! But it was his own fault, for bringing me... the Parasite... back to life!

Appearing in "The Power of the Parasite!"Edit

Synopsis for "The Power of the Parasite!"Edit

An alien geographer reassembles the disintegrated atoms of the Parasite, who saps his energy and life. Then the Parasite goes after Superman, only absorbing a bit of his energy at a time to avoid an overload.

When Linda Danvers gets a computer date with fellow student Duane Todd, he appears to covertly exhibit super-powers, and quotes a phrase in the Kryptonian language. After a while, Supergirl is convinced that Duane is a Kryptonian like herself--almost. But, when she attempts to date him as Supergirl, he gives her the brush-off. And, when Linda falls through the ice of a lake while skating on it, Duane admits he was faking super-powers, and she has to grab on to a log she snuck up from the lake's bottom in order to . Later, Duane admits that he thought she was Supergirl, tried to convince her he was a Kryptonian, and turned her down as Supergirl because he didn't want her, as Linda, to think he was fickle. Since he is convinced that Linda is not Supergirl, he tries the computer dating service again, and gets...well...a "plain" person might be putting it nicely.

Retrieved from "https://heykidscomics.fandom.com/wiki/Action_Comics_Vol_1_361?oldid=1396723"
Community content is available under CC-BY-SA unless otherwise noted.