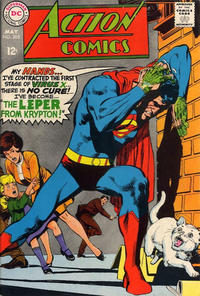 Appearing in "The Leper from Krypton"Edit

Synopsis for "The Leper from Krypton"Edit

Lex Luthor develops Virus X, a plague germ mixed with Kryptonite that is capable of killing Superman. He gives the virus to the criminal ventriloquist Ventor who has hypnotized Clark Kent. Ventor then orders Kent to infect Superman. Clark doesn't remember that he is Superman, but he does try to put the virus of his own pillow. His exposed skin touches the virus and infects him.

The infection causes Superman to snap out of the hypnosis, but he soon develops plague symptoms. Luthor then tells the world that Superman is infected with Virus X. People begin to fear the Man of Steel, and he is forced to leave town. Before leaving Clark intends to leave a letter at the Daily Planet. On the way out he sees Lois Lane, who wants to help Superman.

Appearing in "The Landmark Looters"Edit

Synopsis for "The Landmark Looters"Edit

Giant tweezers from a hole in space reach down and snatch Alcatraz Prison, the Sphinx, the Eiffel Tower, the Stanhope Observatory, the Taj Mahal, and the Statue of Liberty inthat order. When Supergirl investigates, she discovers the culprits are two gigantic alien children from another dimension who are using the monuments as markers on a giant board game. They take her captive with a "super-rope" and offer to play her a game of "Snatchaway", with them leaving Earth if she wins. When she deduces they are weakened in the presence of gold, she steals Fort Knox, immobilizes them with the bullion, and restores the monuments to Earth. The aliens go off to play marbles with asteroids.

Retrieved from "https://heykidscomics.fandom.com/wiki/Action_Comics_Vol_1_363?oldid=1396725"
Community content is available under CC-BY-SA unless otherwise noted.