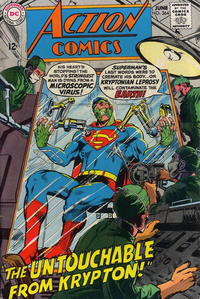 Appearing in "The Untouchable of Metropolis"Edit

Synopsis for "The Untouchable of Metropolis"Edit

Superman, infected by Lex Luthor with Virus X, will die within days. An international team of doctors fails to cure him. Lex Luthor cons Superman's friends out of a million dollars with a phony remedy. Finally, Superman resigns himself to his fate, and boards a rocket which will take him to cremation in Flammbron, the hottest sun in the universe.

Appearing in "The Kiss of Death"Edit

Synopsis for "The Kiss of Death"Edit

When two women wearing a strange tattoo on their arm are romanced by a man named Durkla and die shortly after kissing him, Supergirl investigates. She learns that the two victims and one other woman were part of a gang of murderers and raiders on the water-world of Valair. All three were tattooed with a mark that emitted X-rays so they could be detected by their executioner, Durkla. But all three escaped to Earth, including one who is being hidden by Supergirl; Durkla executed the first two by a poisoned ring. The third proves to be a thief, and dies when she falls into a vat of liquid helium in the Fortress of Solitude.

Retrieved from "https://heykidscomics.fandom.com/wiki/Action_Comics_Vol_1_364?oldid=1396726"
Community content is available under CC-BY-SA unless otherwise noted.