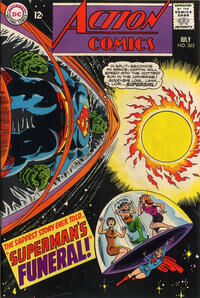 Superman remembers the events of his life as his coffin draws nearer to the star Flammbron. When he passes the Bizarro world, the inhabitants fling red and white Kryptonite at

him in "mourning." Just before the space-casket comes within range of the star, he gets a glimpse of Supergirl, Lois Lane, Lana Lang, and Lori Lemaris, whom Supergirl has brought there in a special space-capsule for one last look at Superman. Then they turn back, and his coffin is engulfed by Flammbron's flames.

Appearing in "Case of the Campus Crimes"Edit

Synopsis for "Case of the Campus Crimes"Edit

Leon Jackson, a Superman fan and Stanhope student, steals a gold Superman statuette from a college exhibit to use as a hood ornament on one ride before he returns it. Supergirl captures him, but he is allowed clemency by the court. Later, acts of vandalism and theft occur on campus, and the evidence points to Leon. Finally, Supergirl deduces that the acts were committed by herself, under the influence of Red Kryptonite. To make amends, she gives Leon the Superman statuette as a gift.

Retrieved from "https://heykidscomics.fandom.com/wiki/Action_Comics_Vol_1_365?oldid=1396727"
Community content is available under CC-BY-SA unless otherwise noted.