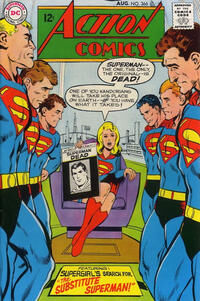 Unbelievable! You'd think they show more respect for me! After all, I'm supposed to be a hero who died in the line of duty!

Superman and his coffin are shielded from Flammbron's flames by devices used by the Flammbronians, creatures of living flame who live on Flammbron's surface. Superman had saved the life of a flame-breathing man related to their race years ago, as Superboy. Taken to an icy planet, Superman discovers that he has been cured of the Virus X, a plant-form of life, by the White Kryptonite meteors thrown by the Bizarros. He returns to Earth to discover that Supergirl and five substitute Supermen are pinch-hitting for him. The substitutes are really five Justice

Leaguers in disguise, who were filling in for him while the Kandorians chose a successor for Superman. Superman thanks his cousin and his fellows for their vigilance.

Appearing in "Stanhope... Off Limits!"Edit

Synopsis for "Stanhope... Off Limits!"Edit

Two alien female terrorists, Alpha and Beta, construct a force-barrier around Stanhope College to imprison the faculty and students (including a Linda Danvers robot) within. Supergirl is more powerful than the twosome, but they warn her that any use of her powers against the barrier, even super-vision, will trigger a bomb which will blow Stanhope to bits. However, Alpha and Beta are free to enter and seek a student named David Carew, who flees with them. Supergirl decides that the crisis warrants her opening a special box which, she thinks, will "change my life...drastically".

Retrieved from "https://heykidscomics.fandom.com/wiki/Action_Comics_Vol_1_366?oldid=1503882"
Community content is available under CC-BY-SA unless otherwise noted.