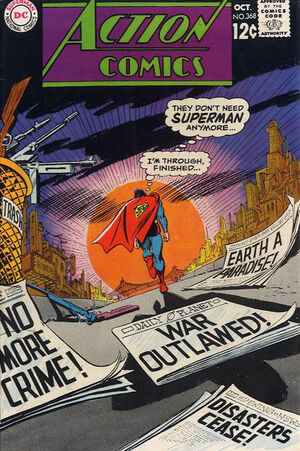 Appearing in "The Unemployed Superman!"Edit

Synopsis for "The Unemployed Superman!"Edit

Superman comes back from a memorial in space of Krypton’s destruction to find that all criminals on Earth and in the Phantom Zone have reformed. Furthermore, there are no more disasters. The change has been wrought by the Sentinels, guardians from another world, who ask Superman to leave and go to a world under a red sun, where he will have no powers, lest he disrupt their project. Superman complies.

Appearing in "Supergirl's Stand to Save Stanhope!"Edit

Synopsis for "Supergirl's Stand to Save Stanhope!"Edit

Superman speeds up to exceed the speed of light, breaks through the time barrier, and emerges several days in the past, before the force-field around Stanhope was created. David Carew and Supergirl finally locate the bomb and disarm it. Two policemen from the year 3604 appear, inform Supergirl that they covertly shielded her from the Gold Kryptonite exposure, and tell her that she still has her powers. She then captures Alpha and Beta and turns them over to the officers. The policemen tell them that Alpha and Beta are criminals from their time, and that, due to substances which are rare in the 37th Century but plentiful in the 20th, Noricon is a priceless substance. They intended to force David Carew to make a large supply of Noricon in 1968, which they would take to 3604 and sell for a fortune. However, the policemen reveal that Alpha's and Beta's research was faulty: Noricon is destined to be discovered by David Carew, Jr., the son of the David Carew of this era. The villainesses are taken back to the future for imprisonment. Supergirl notes that Superman has now returned, and is about to crash through the force-barrier around Stanhope.

Retrieved from "https://heykidscomics.fandom.com/wiki/Action_Comics_Vol_1_368?oldid=1483129"
Community content is available under CC-BY-SA unless otherwise noted.