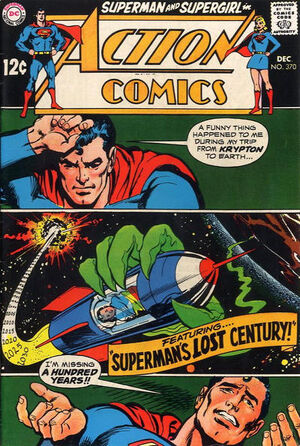 Superman has strange nightmares about having lived an entire lifetime on another planet. When he checks the age of the reconstructed rocket that brought him to Earth, he finds it is over a hundred years old. Unknown to Superman, when his rocket passed into the space-warp between Krypton and Earth, it fell into a parallel universe and landed on a planet populated by cavepeople. But radiations from his body propelled the inhabitants rapidly through social and technological advancement, until they were a space-age culture. Renamed Sonn, Kal-El grew up, married, sired a son, and became president of his world, until a virus of evil spread terror throughout it. Sonn’s son found his father at almost 100 years of age, scientifically reverted him to babyhood, placed him back in the refuelled rocket, and sent it back through the space-warp on a course to Earth. The civilization Kal-El left behind went back to caveman ways, and only two hours had passed in the Earth-One universe since his leaving it.

When she sees Gary Sparks kissing another girl passionately, Linda Danvers decides not to reveal her double identity to him. However, she is still in love with him, so she approaches him as Supergirl and begins romancing him. Eventually, Gary proposes marriage, and Supergirl accepts. Later, however, she uses a Prognosticon computer to create a simulation of what married life with Gary will be like. She discovers that he will be a lazy sod, will cheat on her, and will neglect their daughter. Tearfully, Supergirl admits that Gary is not the man for her, so she will have to find a way to get him to break the engagement. She does so by showing him such a super-display of affection that Gary's bodily safety is threatened. In self-defense, Gary breaks off their engagement. Later, he tries to convince the students at Stanhope he was Supergirl's fiance, and becomes a laughingstock.

Retrieved from "https://heykidscomics.fandom.com/wiki/Action_Comics_Vol_1_370?oldid=1396732"
Community content is available under CC-BY-SA unless otherwise noted.