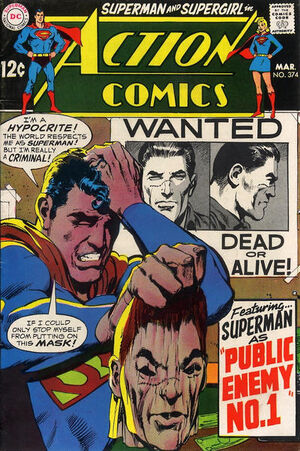 Superman , still suffering amnesia, comes to believe he might be Jud Blake, alias Super-Thief, a wanted criminal. He substitutes for Super-Thief for a time, but is fearful that his criminal identity might be his real “self” and his Superman identity only a sham.

Appearing in "No Mercy for Supergirl!"Edit

Synopsis for "No Mercy for Supergirl!"Edit

When Supergirl tries to recover the notes left by an experimenter in diseases for the World Health Organization, she is captured by a tractor-beam wielded by an alien calling himself the Avenger. The Avenger is from the planet Sarkon, whose laws absolutely forbid taking any life whatever. For super-beings who flaunt this law, the penalty is imprisonment in the 5th Continuum. Since Supergirl has been observed cutting a flower and killing a butterfly for a collection, he sentences her to die. However, Supergirl tricks the Avenger into killing some disease germs. Convicted by his own law, the Avenger commits suicide.

Retrieved from "https://heykidscomics.fandom.com/wiki/Action_Comics_Vol_1_374?oldid=1396736"
Community content is available under CC-BY-SA unless otherwise noted.