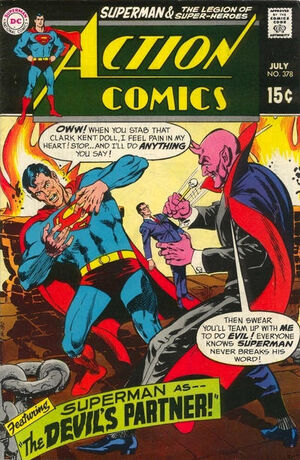 Appearing in "The Devil's Partner"Edit

Synopsis for "The Devil's Partner"Edit

An alien villain called The Marauder finds an amnesiac Rol-Nac in space, outfits him in the image of the Devil, gives him weapons to match, and sends him against Superman. Later, Rol-Nac remembers he is actually Superman’s godfather, having encountered Jor-El and Lara on Krypton, and becomes friends with the Man of Steel.

Appearing in "The Forbidden Fruit"Edit

Synopsis for "The Forbidden Fruit"Edit

Timber Wolf gets treated by a doctor in the crowd after he is injured while foiling an armored car robbery on the streets of Metropolis. Afterward, he finds himself with an insatiable craving for the rare Lotus fruit. The doctor now has the hero in his power, and gives him a fruit for himself and another to be given to a comrade. Returning to Legion Headquarters, Timber Wolf offers Light Lass the Lotus fruit. When she angrily refuses it, he eats it himself. She follows him, only to find him so distracted that he doesn't notice her. Realizing that someone is using Timber Wolf to get the entire Legion under his control, Light Lass trails Timber Wolf to a Metropolis alleyway, where he meets the doctor and demands more fruit. The doctor appears with a whole basketful, ordering him to share it with his fellow Legionnaires. As he reaches for it, Light Lass makes it super-light so that a breeze blows it to her. She then connects the basket to a blast grenade strapped to her belt, so that if Timber Wolf moves even one fruit, she will die. He agonizes over this dilemma, but finally his love for Light Lass wins out, and he knocks the doctor unconscious.