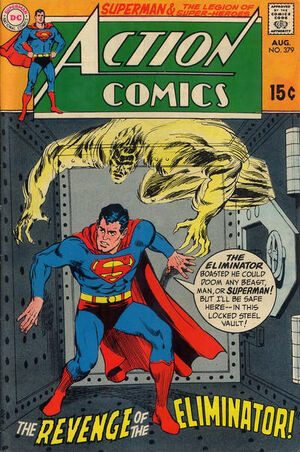 Superman seems to trigger a curse that kills seven reporters, but learns later that they were only aliens imitating the reporters and that an other-world lawman has been executing them for murder.

Appearing in "One of Us is an Imposter!"Edit

Synopsis for "One of Us is an Imposter!"Edit

As deputy leader Mon-El calls a Legion meeting to order with Lightning Lad, Element Lad, Dream Girl, and Shadow Lass in attendance, a computer alarm suddenly warns that one of the members present is an impostor, but the machine explodes before it can identify the intruder. As the heroes discuss methods of identifying the false Legionnaire, another emergency signal alerts them to a crime in progress. A criminal called Sunburst, who wields solar power by means of his special gloves, is robbing the Metropolis Mint. As the Legionnaires attempt to capture him, however, each of them suffers a mishap in using his powers. Finally, Shadow Lass blinds the villain with her darkness-casting power, and Mon-El knocks him unconscious. The heroes gather around the fallen Sunburst and accuse each other of being the impostor because of the way each of their powers failed them. Mon-El then pulls a mask off "Shadow Lass" to reveal her as the impersonator, having suspected her because she was not weakened by Sunburst's power. The girl confesses and tells them where to locate the real Shadow Lass.

Retrieved from "https://heykidscomics.fandom.com/wiki/Action_Comics_Vol_1_379?oldid=1500185"
Community content is available under CC-BY-SA unless otherwise noted.