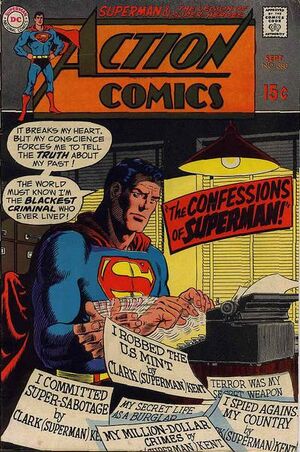 Appearing in "The Confessions of Superman"Edit

Synopsis for "The Confessions of Superman"Edit

Two members of the Superman Revenge Squad come to Earth and convince Superman that he has been performing crimes as a Jekyll-and-Hyde personality. When Krit, disguised as Supergirl, convinces him he is not suffering from an exposure to Red Kryptonite (which he actually is), he types out his confessions to the crimes at the Daily Planet and goes to his Fortress to expose himself to Gold Kryptonite.

Appearing in "Half a Legionnaire"Edit

Synopsis for "Half a Legionnaire"Edit

Duo Damsel is exhausted after her latest assignment, so when Mon-El sends her to deliver important papers to the planet Ikros, one of her twin selves, whom Bouncing Boy dubs Luomu II, undertakes the mission while the other remains on Earth to relax. Days have passed without word from Luomu's other self, when a masked man and woman with super-powers suddenly appear on Earth and begin committing robberies. Investigating, Mon-El, Bouncing Boy, and Duo Damsel encounter Luornu II, who introduces them to her fiance, Nam'Lor. Nam'Lor departs and the two Luomus again become one. Mon-El, who has to leave on a space mission, warns Bouncing Boy to watch Duo Damsel carefully. A distraught Duo Damsel soon recalls Luomu II's recent experiences in a dream. After completing her mission to Ikros, she had been rescued from a fall by the planet's hero, Nam'Lor, with whom she quickly fell in love. Duo Damsel wakes in terror, and Luornu II suddenly splits off from her and departs. The heroine now realizes that her other self has developed a distinct, separate personality. After an inconclusive skirmish with the two masked raiders at Metropolis's Amalgonite Refinery, Bouncing Boy and Duo Damsel realize that the criminals are actually Nam'Lor and Luomu II, whom he calls Lelith. Confronted by the two, Bouncing Boy attempts to stop Nam'Lor with a super-power neutralizer, but he avoids the blasts and overpowers the Legionnaire. Lelith then orders Nam'Lor to kill Bouncing Boy, but he refuses. He then explains that the hyper-aura surrounding his body, which gives him his powers, had turned Lelith evil, and that he had committed crimes for her in the hope that she would return to normal, because he loved her. He now leaves her forever, telling the Legionnaires that the aura-radiation will wear off in a few days, and Lelith will become her old self.

Retrieved from "https://heykidscomics.fandom.com/wiki/Action_Comics_Vol_1_380?oldid=1483131"
Community content is available under CC-BY-SA unless otherwise noted.