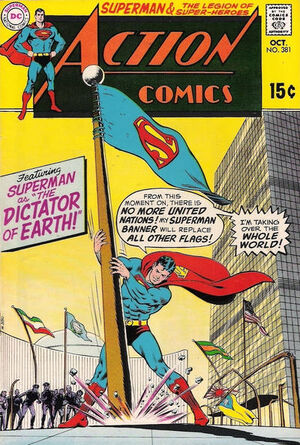 Appearing in "The Dictator of Earth"Edit

Synopsis for "The Dictator of Earth"Edit

Superman decides against exposing himself to the Gold Kryptonite, determines that he has been affected by Red Kryptonite, and engineers a ruse that smokes out Krit and Dorx.

Appearing in "The Hapless Hero"Edit

Synopsis for "The Hapless Hero"Edit

Retrieved from "https://heykidscomics.fandom.com/wiki/Action_Comics_Vol_1_381?oldid=1500175"
Community content is available under CC-BY-SA unless otherwise noted.