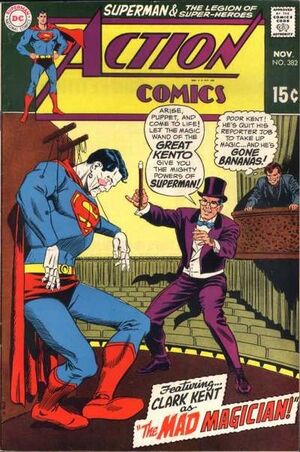 Clark Kent is given a collection of magic tricks from a deceased magician and, when both he and Jimmy Olsen are fired from the Daily Planet, embarks on a new career as a stage magician, Kento.

Appearing in "Kill a Friend to Save a World"Edit

Synopsis for "Kill a Friend to Save a World"Edit

After Ultra Boy is publicly challenged and defeated by an android of his design, a man named Cosvarr appears at a conference of the Interworld Security Council offering to sell his creations to members of the United Planets. Called Protectors, these androids are said to be superior defense machines, eliminating the need for armies, weapons, and police. The Legion members deduce Cosvarr's scheme: Every planet will want his machines because those without them will be menaced by those who have them, and the resulting arms race will net him billions. Some time later, on Jupiter, Cosvarr and his partner, a young woman named Zorla, prepare to receive a guest, billionairess Carina Walter (actually a disguised Light Lass), who is interested in buying a Protector. Cosvarr tells her that he experimented on Superboy and Mon-El, whom he captured by hypnosis, and duplicated some of their powers in his Protectors. Meanwhile, Shrinking Violet, Karate Kid, and Timber Wolf (disguised as one of Cosvarr's workers) emerge from Carina's ship to investigate the premises. When Zorla discovers Timber Wolf's presence, he is forced to battle Karate Kid in order to maintain his masquerade. Zorla causes components on an assembly line to fly at Karate Kid and knock him out. She then tries unsuccessfully to alert Cosvarr, whom she finds trying to persuade Carina to replace Zorla as his lover and ally. She confronts him, and as the Legionnaires rescue Superboy and Mon-El and escape, Zorla has her revenge by pressing a button which destroys Cosvarr's entire base.

Retrieved from "https://heykidscomics.fandom.com/wiki/Action_Comics_Vol_1_382?oldid=1500206"
Community content is available under CC-BY-SA unless otherwise noted.