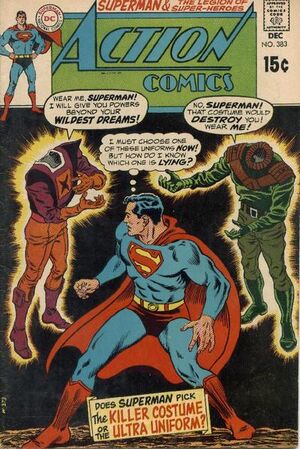 Appearing in "The Killer Costume!"Edit

Synopsis for "The Killer Costume!"Edit

Superman encounters the uniform of Aarbur, a space-criminal who died from a comet’s radiation, along with the lawman who caught him, but whose spirit lives on in the animated uniform. The uniform seeks out Earthmen to don it, by whom it hopes to continue in its criminal career, but its energies destroy two wearers and the third is stymied by Superman. Aarbur’s uniform abandons its host and tries to clothe Superman in itself, but as it approaches him, so does the animated uniform of the lawman Enforcer NS-II.

Chameleon Boy substitutes for a busy Karate Kid as Princess Projectra's escort to a weekend party at the home of her wealthy friend, Janice Warren. Upon their arrival, Chameleon Boy is immediately attracted to Janice, who strongly resembles Princess Elwinda, the girl he once loved and almost married. Eavesdropping, he hears Janice telling Projectra that she fords his alien appearance distasteful and that she much prefers a darkly-handsome Earth type. With Projectra's help, Chameleon Boy makes it appear that he has left the party, while actually assuming the guise of Dane Roberts, a young man with all the attributes Janice admires, in which identity he becomes her escort. That night, Janice's valuable light-jewel is stolen from her vault, and Dane becomes a suspect. In order to clear himself, he secretly uses his shape-changing powers to discover that the true culprit is Al, a robot service man who has secreted a closed-circuit TV camera in the robot guarding the vault. When Dane and Janice find further evidence in Al's shop, he surprises them and threatens to use a senili-ray on Janice, aging her 10,000 years in 30 seconds. Dane transforms himself into Janice's double to distract Al, then becomes an octoid man of the planet Luvan and knocks him out. Janice now realizes Dane's true identity, but embraces him for saving her life. A happy Chameleon Boy now knows that she loves him for himself.

Retrieved from "https://heykidscomics.fandom.com/wiki/Action_Comics_Vol_1_383?oldid=1500209"
Community content is available under CC-BY-SA unless otherwise noted.