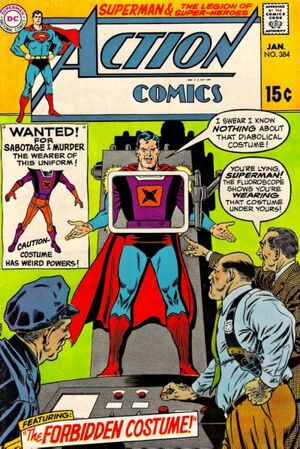 Appearing in "The Forbidden Costume!"Edit

Synopsis for "The Forbidden Costume!"Edit

Superman must deal with two discarnate intelligences who have possessed their super-powered uniforms. He manages, with the help of Supergirl, Batman, and Perry White.

Appearing in "Lament for a Legionnaire!"Edit

Synopsis for "Lament for a Legionnaire!"Edit

Dream Girl has a prophetic dream in which she foresees the death and funeral of Mon-El, which will take place in five days. Once Mon-El learns of the prediction, he resists his teammates' efforts to help him escape his fate. When the High Commissioner of Daxam proposes that Mon-El hide in an impenetrable sanctuary on his homeworld until the day of his predicted demise has passed, he refuses, instead choosing to go on a mission like any other Legionnaire. Karate Kid sends him to the Posvar asteroid complex to investigate the wrecked Posvar III probe. Days pass, and Mon-El fmally returns to Legion Headquarters, but he has apparently lost his earlier confidence. That night, Superboy sneaks into his room but is surprised by his friend, who realizes that the Boy of Steel had planned to kidnap him and face his death in disguise. On the fatal day, while his comrades are trapped inside a force-shield surrounding their headquarters, Mon-El fights and drives off a band of interdimensional raiders. He then reveals that he is actually El-Gand, a descendant of Mon-El's older brother. He succeeded at what Superboy had tried to do, overpowering the real Mon-El in the Posvar asteroid belt, drugging him with a super-sedative on a nearby planetoid, and taking his place. Dream Girl's prophecy has apparently been foiled, and Eltro Gand takes the Legion to their comrade. When they arrive, however, they find the real Mon-El dead, since the serum he takes to counteract his vulnerability to lead has worn off, and traces of lead in the surrounding rocks have killed him. Grief-stricken, Eltro Gand snatches up Mon-El's body and takes it back to Legion Headquarters, where he places both of them in an exchanger, a device similar in function to the process once used to restore Lightning Lad. The others arrive just as he gives his life-force to Mon-El. Because of Eltro Gand's sacrifice, the hero lives again.

Retrieved from "https://heykidscomics.fandom.com/wiki/Action_Comics_Vol_1_384?oldid=1500157"
Community content is available under CC-BY-SA unless otherwise noted.