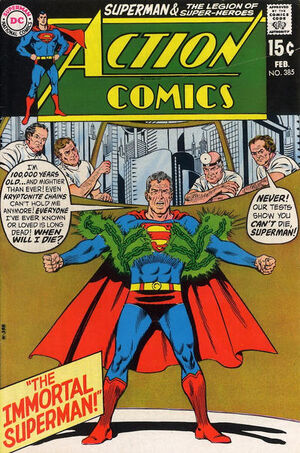 Appearing in "The Immortal Superman!"Edit

Synopsis for "The Immortal Superman!"Edit

The Time-Trapper covertly induces Superman to use a defective time-bubble to journey to the year 101,970 A.D. and places a time-barrier behind him, preventing him from returning to his proper era. Superman ages because of a defect in the time-bubble, but is still powerful enough to defeat an energy menace in that era. He goes further into the future, in which three super-heroes of that time immunize him to Kryptonite, magic, Virus X, or a red sun.

Appearing in "The Fallen Starboy!"Edit

Synopsis for "The Fallen Starboy!"Edit

Star Boy, Saturn Girl, and Colossal Boy respond to an emergency call from Star Boy's home planet Xanthu, where a criminal gang has been raiding shipments of valuable materials and has resisted all police attempts to stop them. The Legionnaires help guard archeological treasures en route to the X. City Museum, but the air-truck containing the treasures reaches the city without mishap, while Saturn Girl is unable to sense any suspicious thoughts. The pirates, wearing anti-telepathy helmets, then appear without warning and attack. In the ensuing battle, the treasures are saved, but the raiders escape. The heroes deduce that the criminals must be from Naltor, Dream Girl's home planet, and that their powers of precognition have enabled them to foresee how the shipments would be made and how the police would attempt to capture them. The Legionnaires cannot guess that the gang's leader is Yark Althu, the brother of Kenz Nuhor, the man Star Boy once killed in self-defense. Althu desires revenge for his brother's death, and a new premonition tells him that he will succeed in capturing Star Boy the following day. In a battle with the pirates the next day, Star Boy is caught in a teleport ray and finds himself aboard Yark Althu's spaceship, where there is no gravity, which supposedly nullifies his powers. Yark Althu intends to kill him with the same kind of ray-gun Star Boy had used on his brother, and the hero barely avoids its blasts. However, since Star Boy's power increases an object's mass, not its weight, he is able to defeat his adversary by making first the ray-gun, then Althu himself, too massive to move. Just as Althu's men are about to blast Star Boy, Colossal Boy and Saturn Girl arrive to rescue him and capture the pirates. Satum Girl explains that she was able to locate them despite their anti-telepathy helmets because Star Boy was not wearing one.

Retrieved from "https://heykidscomics.fandom.com/wiki/Action_Comics_Vol_1_385?oldid=1483133"
Community content is available under CC-BY-SA unless otherwise noted.