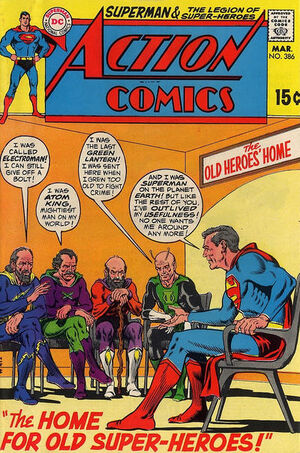 Appearing in "The Home for Old Super-Heroes!"Edit

Synopsis for "The Home for Old Super-Heroes!"Edit

Superman travels even further into the future, in which super-powers are outlawed due to a disaster involving three super-heroes of the past. He is sent to the world of Diodn to live with other aged super-heroes, but leads them in an operation to save the Metropolis of that era. The mayor of Metropolis vows to get the anti-super-hero law rescinded. Superman continues even further into the future.

Appearing in "Zap Goes the Legion!"Edit

Synopsis for "Zap Goes the Legion!"Edit

Uli Alger, who once impersonated Shadow Lass and tried to steal Legion secrets, is seemingly rehabilitated and is released from prison. However, she had immunized herself against the light-mechanism used to reform her, and days later, she reappears on Earth and attacks several Legion members and Night Girl, using a device that turns their various powers against them. When she issues a challenge to the other Legionnaires, they agree to meet her on Talus, an asteroid made of junked spaceships, where they have a trap prepared for her. Although Uli escapes the encounter, Phantom Girl is able to stow away aboard her ship. Returning to Earth, Uli lands in Midway City, which was mined in an atomic war centuries earlier. Phantom Girl summons Brainiac 5 and Ultra Boy, but is injured when the villainess spots her. Arriving, Brainiac 5 treats Phantom Girl while Ultra Boy searches for their antagonist. Uli answers his challenge, and Ultra Boy, not using any of his powers lest she turn them against him, defeats her with an old-fashioned uppercut.

Retrieved from "https://heykidscomics.fandom.com/wiki/Action_Comics_Vol_1_386?oldid=1483134"
Community content is available under CC-BY-SA unless otherwise noted.