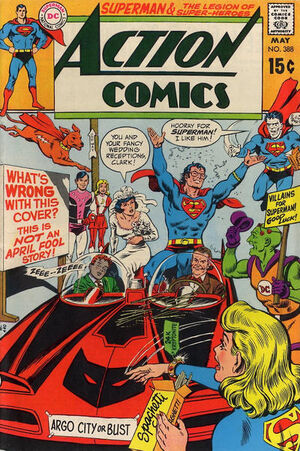 Appearing in "Puzzle of the Wild World"Edit

Synopsis for "Puzzle of the Wild World"Edit

The experiment of Prof. Farlow Nurd creates a distorted duplicate Earth which displaces Earth-One into another dimension while Superman is in space. He returns to find a whacky parody-world in which Sgt. Rock is still fighting World War II, but seeking revenge on that Earth's Superman for beating him out for Lois Lane's hand; where Lex Luthor's hair grows when he gets mad; and where Bizarro is a genius while Mr. Mxyzptlk is a dummy. Superman restores Earth-One to its normal plane and displaces the distorted duplicate Earth into another dimension.

Retrieved from "https://heykidscomics.fandom.com/wiki/Action_Comics_Vol_1_388?oldid=1483136"
Community content is available under CC-BY-SA unless otherwise noted.