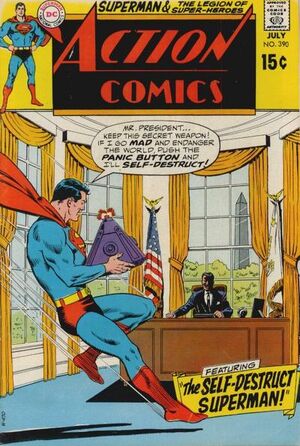 Appearing in "The Self-Destruct Superman"Edit

Synopsis for "The Self-Destruct Superman"Edit

Superman is endangered when the SEM, a weapon designed to eliminate him if he ever turns evil, is accidentally activated--and he has no idea of how to stop it.

Appearing in "The Tyrant and the Traitor"Edit

Synopsis for "The Tyrant and the Traitor"Edit

President Peralla of the planet Lahum, who commands an army of virtually indestructible androids, has conquered his world and plans to do the same to other planets, while Diol Masrin, who has led his people in revolt against Peralla, is secretly allied with the Dark Circle empire. Unable to intervene officially, the United Planets requests the aid of Chameleon Boy and the Legion Espionage Squad. Chameleon Boy selects Brainiac 5, Timber Wolf, Element Lad, Saturn Girl, and Karate Kid to accompany him on this mission. Some time later, the Legionnaires capture a ship carrying contraband weapons to Lahum, weapons supposedly effective against the androids but actually obselete. Impersonating the ship's crew, the Legionnaires rendezvous with Chavak, Masrin's lieutenant. They capture him, and Chameleon Boy takes his place, while the other male Legionnaires pose as new recruits. The disguised Legionnaires, accompanying the rebels on a march to their base camp, are ambushed by the humanoids. When blasted, the chemical beings burst into pieces, each of which then grows into a new humanoid. The rebels manage to escape and reach their camp, where they meet Masrin and the disguised Chameleon Boy encounters the real Chavak's girlfriend, Yroa. Saturn Girl, meanwhile, reaches Hueuas, Lahum's capital city, and schemes to infiltrate the Presidential Palace by applying to become the assistant of Wanpar, Chief of Scientific Development, unaware that a woman on his staff recognizes her as Imra Ardeen.

Retrieved from "https://heykidscomics.fandom.com/wiki/Action_Comics_Vol_1_390?oldid=1483138"
Community content is available under CC-BY-SA unless otherwise noted.