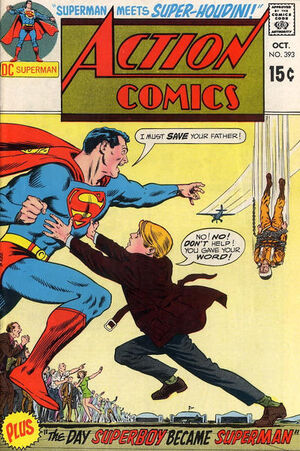 Gangsters blackmail escape artist Hairbreadth Holahan into attempting to break a gang-boss out of jail, threatening to reveal that he is an escaped convict if he refuses. But Superman helps Holahan turn the tables on the blackmailers.

Superboy at first opposes student Marla Harvey’s support of the Raiders, a gang of slum kids who steal food and books from Metropolis University. But after he fails to rescue her from the razing of a slum building in which she had attempted to hold school for the Raiders, Superboy at first begins constructing a new school on the building site--then stops, telling the citizens that building their school and reforming their slum is up to them. A few months later, now operating as Superman, he helps dedicate the new school, and changes a bust of himself to one of Marla Harvey.

Retrieved from "https://heykidscomics.fandom.com/wiki/Action_Comics_Vol_1_393?oldid=1483140"
Community content is available under CC-BY-SA unless otherwise noted.