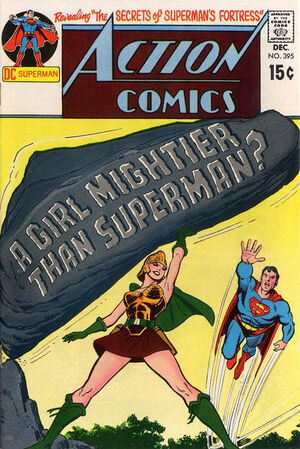 Appearing in "The Secrets of Superman's Fortress"Edit

Synopsis for "The Secrets of Superman's Fortress"Edit

After Lois Lane sees a single feather exhibited in the Fortress of Solitude, Superman silently reminisces over his past encounter with Captain Althera, an Amazon from another world with whom he once fell in love.

Appearing in "The Credit Card of Catastrophe"Edit

Synopsis for "The Credit Card of Catastrophe"Edit

Superman visits Madame Mephisto, a gypsy fortune-teller at a carnival, who gives him a "credit card" that is good for three wishes. She says once he uses it three times, he will find out what it costs. Superman considers it a gag, until his power fades out three times and he regains it each time by using one of the wishes on the card. He goes to Madame Mephisto, who says she has erased his powers magically and will restore them for half the gold in Fort Knox. He agrees. She makes him super again, and he returns with half the gold in Fort Knox, given to him with a promise to the authorities to replace it, and dumps it all on Madame Mephisto. Seconds later, he digs her out and unmasks her as Supergirl. She said that she assumed the identity of the fortune-teller to see whether or not she or Superman could be hypnotized into comitting a super-crime, and used super-hypnosis to convince Superman he had lost his powers, while standing nearby when each crisis happened in which Superman used his card. Superman said he deduced her true identity when he wondered why Madame Mephisto didn't use her magic to get the gold herself, rather than using him to do the job, and then realized he had not lost all his powers. The two Kryptonians fly the gold back to Fort Knox, and Supergirl admits she still doesn't know if they can be hypnotized into committing crimes or not.

Retrieved from "https://heykidscomics.fandom.com/wiki/Action_Comics_Vol_1_395?oldid=1483142"
Community content is available under CC-BY-SA unless otherwise noted.