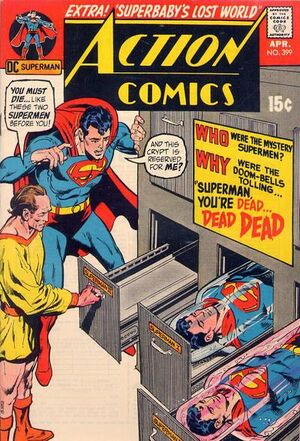 The Superman of the Earth-One dimension is captured and brought to an alternate future Earth in the 24th century to defend it from a energy vampire that has killed two alternate counterparts to himself before he can be transported back to his home reality and time.

While at an amusement park, Superbaby loses his parents and falls into the hands of Connie and Hyde, two jewel thieves.

Retrieved from "https://heykidscomics.fandom.com/wiki/Action_Comics_Vol_1_399?oldid=1396761"
Community content is available under CC-BY-SA unless otherwise noted.