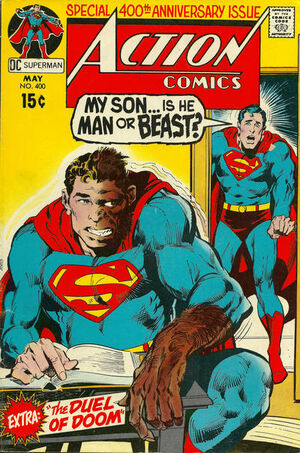 Appearing in "My Son... Is He Man or Beast?"Edit

Synopsis for "My Son... Is He Man or Beast?"Edit

Superman is named guardian of Gregor Nagy, a late friend's son, only to discover that the youth has gained the power to metamorphosize his body into animal forms from an experiment of his father's -- and that he resents Superman.

Appearing in "Duel of Doom!"Edit

Synopsis for "Duel of Doom!"Edit

Two Kandorian students, Yllura and Arvor, face a graduation exercise of conducting "an original exploration into Kandor's past." Both are rivals, with Yllura idolizing Supergirl and Arvor hero-worshipping Superman. But, when each gets in trouble on their archaeological trip, they help each other to reach safety. Realizing that teamwork is necessary for success, Arvor and Yllura call off their rivalry. Later, they are awarded a joint trophy by Superman and Supergirl.