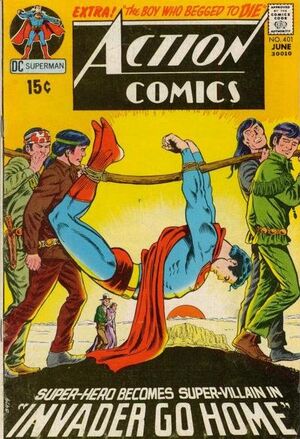 Superman becomes embroiled in a conflict between Navarro Indians, who want to reclaim their land, and Frank Haldane, who has built a missile-manufacturing site on it. But Red Hawk steals Superman's powers with a mysterious red jewel, and the Indians take him captive, intending to trade him for their lost land.

Appearing in "The Boy Who Begged to Die!"Edit

Synopsis for "The Boy Who Begged to Die!"Edit

Superman has Masonville evacuated to save it from the explosion of a meteorite he is holding, and then finds out one citizen remains--a crippled boy.

Retrieved from "https://heykidscomics.fandom.com/wiki/Action_Comics_Vol_1_401?oldid=1500161"
Community content is available under CC-BY-SA unless otherwise noted.