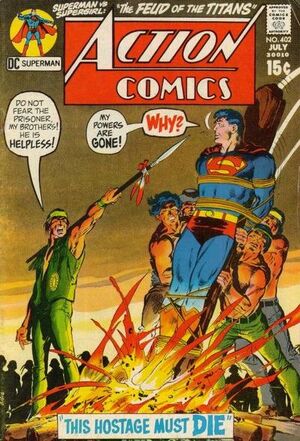 Appearing in "This Hostage Must Die!"Edit

Synopsis for "This Hostage Must Die!"Edit

Superman discovers that the red jewel is drawing energy from a red sun, and frees himself by blocking out its light. Then he discovers that Frank Haldane has found the treasure of Montezuma, and is attempting to steal it with a mechanical mole of his own design. Superman captures Haldane and turns the wealth over to the Navarros.

Appearing in "Feud of the Titans!"Edit

Synopsis for "Feud of the Titans!"Edit

Superman and Supergirl are made hostile to each other and goaded into a super-feud when fumes from a "brainwash bomb" they are disposing of in the Fortress of Solitude's disintegration pit combine with Kryptonian elements there and make them hate each other. Superman begins to suspect the truth after seeing a two-headed bird's two heads quarrel with each other in the Fortress, and he rescues Supergirl from death when she falls into the disintegration pit. Once outside the Fortress, they regain their senses, and they clean the gas from their headquarters.

Retrieved from "https://heykidscomics.fandom.com/wiki/Action_Comics_Vol_1_402?oldid=1517129"
Community content is available under CC-BY-SA unless otherwise noted.