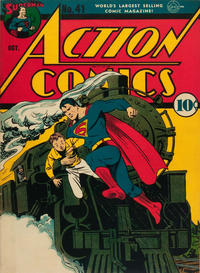 Appearing in "The Sabotage Ring"Edit

Synopsis for "The Sabotage Ring"Edit

Clark Kent and Lois Lane tour a factory, when Clark sees a concealed time bomb. Changing into Superman, he removes the bomb and throws it away just before it detonates. he turns back to Clark, and hears of a possible lead: three men who were off work that day. He ditches Lois, changes back to Superman, and watches while the police check it out. One man is seriously ill; a second is one his honeymoon. The third, Steve Grant, has no excuse, and he refuses to let his closet be searched.It is full of raw materials for bombs. Grant knocks out the policeman and throws him out the window. Superman catches the cop, and chases the fleeing crook. He prevents a traffic collision, but Grant's employer tries to blow him up. Superman rescues him at the last minute. Grant tells him that his boss is disrupting the national defense effort. The next day, Clark and Lois visit Grant in prison. Another visitor has a concealed gun, and Clark knocks his arms before he can shoot Grant. The next evening, Superman watches another attempt to remove Grant. A truck crashes into the cell, and several thugs kidnap. him. Superman and the police follow. Superman sees the thugs remove a sign warning of a washed out road, and stops the police cars. With his super-hearing, he hears a news report on a wave of sabotage. He locates the hidden cave with x-ray vision, and saves Grant, bringing him and the thugs to the cops. He also finds out that the next target is the Daily Planet. At the Planet, Lois sees a man come in to fix the telephones. As the phone is working fine, she investigates, and sees him planting a bomb. He ties her up. Superman arrives, defuses the bomb, and frees Lois. They follow the saboteur, and catch the boss. Superman leaves Lois to turn over the boss and his list of agents to the police, and, as Clark, scoops her.

Appearing in "2nd Story (No Title)"Edit

Synopsis for "2nd Story (No Title)"Edit

Retrieved from "https://heykidscomics.fandom.com/wiki/Action_Comics_Vol_1_41?oldid=1482892"
Community content is available under CC-BY-SA unless otherwise noted.