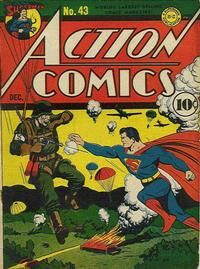 Appearing in "The Pilot's Revenge"Edit

Synopsis for "The Pilot's Revenge"Edit

A number of planes belonging to Skyways Airlines crash. Perry White sends Lois Lane to interview the manager of the company, Avery Thornton. Lois decides to take one of Skyways' planes, despite Clark Kent advising against it. He follows as Superman and catches the plane when an explosion destroys the controls. He flies the crippled plane with it's injured pilot the rest of the way himself,arriving before schedule.

While Lois goes off for her interview, Superman keeps a lookout. He sees Thornton's butler call the police as soon as Lois arrives, and finds Thornton dead. He warns Lois to leave, but she doesn't until he shows her what happened. He takes her way, changes to Clark and tells her that he came to see that she was safe. They catch the butler, and he starts to talk after Lois offers to shoot him. Before he can name his employer, a plane comes down and shoots him. Clark shields Lois, but they are captured by thugs who tie them up in a wooden tower and set fire to it. Lois knocks herself out trying to get free, letting Clark change to Superman and rescue her. After she revives, he chases and catches the thugs. They tell him that they work for the Dutch O'Leary gang.

Later, Lois is chloroformed after sending a telegram to Perry. Meanwhile, Superman finds out Dutch was a Skyways pilot until he was discharged for recklessness resulting in a crash. He finds out about Lois' kidnap from the thug who caught her, and is told that Dutch took her up in his plane to kill her. He catches up as Lois is thrown out and smashes the plane, leaving Dutch alive to face the police. Lois arrives back in Metropolis to find Clark filed the story before her.

Greg Sanders meets an old cowboy named Billy Gunn at a show. Greg feels sorry for the old man because he wears tattered clothing. He then offers to switch outfits to avoid his fans. Billy accepts Greg's clothes, and Greg leaves the show dressed in Billy's. A gunman then mistakes Greg for the old man and shoots at him. Billy comes to Greg's aid, and they capture the gunman.

The would-be murderer won't talk for fear that his boss, the Shade, will kill him. When the killers strike again, Vigilante protects Billy. He then tracks the crooks to their hideout. However, Vigilante is captured. Billy is able to rescue the Vigilante, then they stop the Shade's men at a tungsten plant. The Shade escapes, but the Vigilante learns that he wanted to kill Billy because he inherited a mine out west.

Appearing in "The Adventure of the Ancient Airplane"Edit

Synopsis for "The Adventure of the Ancient Airplane"Edit

Synopsis for "The Giant Puppets"Edit

Giant invaders menace Center City, then suddenly disappear. A blackmail demand is then issued ordering workers to stop war production. Tex Thomson is called to the district attorney's office where Mr. Black, the head of the Citizens League, is demanding answers. During the meeting Black insults Bob Daley.

While Tex finishes the meeting, Bob exits and dons his Fatman costume. Tex sees Bob and deduces his secret. Fatman then goes to Black's home to confront him. He is captured and learns that Black and his partners are behind the blackmail demands.

Tex follows Bob as Mr. America. He locates one of the invaders and discovers that it is an electrical powered puppet. Hiding inside the automaton, Mr. America is able to surprise the conspirators. He knocks them out, then leaves them for Bob to claim credit for their capture.

Appearing in "The Golden Idol"Edit

Synopsis for "The Golden Idol"Edit

In an area of coastal Africa where the ground water and springs are poisonous, Congo Bill learns the legend of a giant gold idol with jewels for eyes. Whenever a person approaches the idol, the are struck dead. Congo Bill witnesses a man running toward the idol die. Rodney Fortescue who was fighting the man prior to his death explains that he was trying to save the man. Congo Bill deduces that Fortescue is a spy using the idol to conceal a telescope and a radio, with which he reports positions of British vessels off the coast, to German U-boats, also off the coast. The steps leading up to the idol are charged with electricity to kill intruders. Uncovered, Fortescue assaults Bill, then runs off into the jungle. However, he is carrying a canteen of the poisoned local water, which Bill knows will kill him.

Appearing in "The Boss of Forrest City"Edit

Synopsis for "The Boss of Forrest City"Edit

Zatara saves the life of a building inspector when a wall collapses. The magician learns that the building is being constructed with inferior materials, but the inspector is too afraid of racket boss Honeyboy Hannis to report it. Zatara visits the mayor to report the problem and learns that even city officials are also in fear of Honeyboy.

Zatara visits Honeyboy's office and fights off two henchmen. He demands that the gangster use proper construction materials. Honeyboy pretends to agree to Zatara's demands, but refuses to make the changes.

Zatara returns to the construction site with the inspector. When he sees the inferior materials still being used, he uses magic to animate the bricks and boards. He then chases away Honeyboy's guards and returns to the racket boss's office. This time he scares Honeyboy into leaving town. The construction project is then completed using quality materials.

Retrieved from "https://heykidscomics.fandom.com/wiki/Action_Comics_Vol_1_43?oldid=1482893"
Community content is available under CC-BY-SA unless otherwise noted.