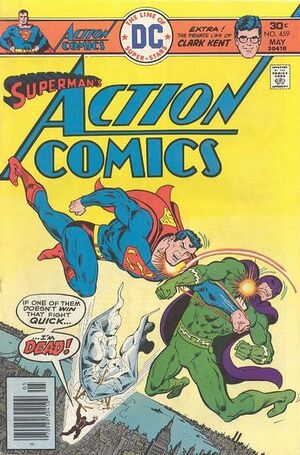 Morgan Edge sends Clark Kent to investigate the kidnapping of a heavyweight championship boxer. As Clark leaves, he has an altercation with a pedestrian over a cab ride. He learns that the cab has been used as the payoff point for the champ's ransom. Clark takes the money and "allows" himself to be mugged by the crook. Aftewards, he follows him to his lair and frees the boxer. The champ knocks the thug out and then promises Clark the exclusive on the story.

Retrieved from "https://heykidscomics.fandom.com/wiki/Action_Comics_Vol_1_459?oldid=1636846"
Community content is available under CC-BY-SA unless otherwise noted.