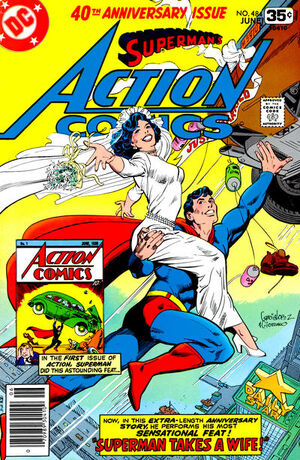 Appearing in "Superman Takes a Wife!"Edit

Synopsis for "Superman Takes a Wife!"Edit

In Metropolis of Earth-Two in the early 1950s, Superman fights the Mechanical Marauders, which were built by Colonel Future. When Superman destroys them, Col. Future declares that he is going to find a way to destroy the Man of Steel.

At the Daily Star, Lois Lane tries once again to prove that Clark Kent is Superman, but fails.

Elsewhere, Col. Future has the villain known as the Wizard brought before him. He offers him the Glastonbury Wand as payment if the Wizard can permanently remove Superman from the face of the Earth. The Wizard accepts and plans to test the wand immediately.

Meanwhile, Lois and Clark are walking down the street discussing Col. Future's gang. Suddenly, two members from the gang attack them. Clark changes to Superman to fight them, but disappears in the middle of the battle. It seems that the Wizard has cast a spell, making Superman disappear from the face of the Earth.

Later, the ground where Superman vanished opens up and Clark Kent walks off towards Metropolis. Clark doesn't remember he's Superman, and in the days and weeks that follow, he becomes a fist-fighting reporter taking down gambling dens and the like, while also dating Lois Lane. He too begins to wonder what happened to Superman, but no one seems to know.

After almost a year, Lois and Clark get married and on their honeymoon, Col. Future's men try to kill Clark. He survives, leading Lois to get suspicious once again about his true identity. That night, she tries to cut his hair and the scissors break. She realizes that she's married to Superman, but Superman still doesn't remember who he really is. After the honeymoon, Lois does some investigating and tracks down the Wizard, who has become a bum and is asleep on a park bench.

Apparently, since he didn't gain any notoriety for eliminating Superman, he's lost all of his confidence. Lois convinces him to bring the Man of Steel back in order for him to regain some measure of self-respect. When Superman returns, Lois assumes that their marriage is over, but he disagrees and takes her to his Secret Sanctuary, where they renew their vows in a Kryptonian marriage ceremony.

Retrieved from "https://heykidscomics.fandom.com/wiki/Action_Comics_Vol_1_484?oldid=1396846"
Community content is available under CC-BY-SA unless otherwise noted.