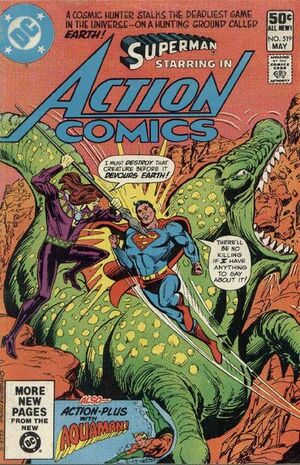 Superman tries to prevent an alien hunter from destroying a monster which he soon learns destroyed the alien's planet.

Aquaman, Mera, and Cal Durham learn the strange history of Aquaman’s mother: that Atlanna was a survivor of the original Atlantis, thanks to her taking a serum of her own invention that made her amphibious and nearly immortal; that her sister, Atlena, was a priestess of the Delphius Oracle, which proclaimed that a savior would be born to become king of sea and land people; that Atlanna did not really die in Aquaman’s childhood, but was merely rendered comatose, from which state she awoke, having become mad; that Poseidon himself is an android programmed with Tom Curry’s memories; and that she believes Aquaman is the prophesied savior, and she wishes to kill him with Ocean Master’s help.

Retrieved from "https://heykidscomics.fandom.com/wiki/Action_Comics_Vol_1_519?oldid=1396884"
Community content is available under CC-BY-SA unless otherwise noted.