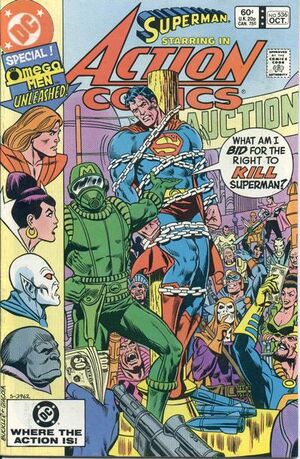 Appearing in "Battle Beneath The Earth!"Edit

Synopsis for "Battle Beneath The Earth!"Edit

The Omega Men, Lois Lane, and Cave Carson go in search of Superman , who lies bound to a post by the Mole before a large group of super-villains, one of whom will get the opportunity to kill him.

Appearing in "I Talk to the Seas, But They Don't Listen to Me!"Edit

Synopsis for "I Talk to the Seas, But They Don't Listen to Me!"Edit

Aquaman has a dream of Mera calling to him for help. After he awakens, he keeps an appointment to see Dr. Todd Carmel and Admiral Murphy at a S.T.A.R. sea station. They hope to learn how Aquaman telepathically “talks” to sea creatures, so that normal men will be able to do the same, by using a “brain-print” machine on Aquaman. When Aquaman asks if the device can be used to tap into a person’s memories, and is told it might be possible, he has Carmel use it on him to focus on his memory of Mera’s dream. When the readout on the dream-memory is compared to a real memory he has of Mera, the two readings match. This indicates that Mera’s communication was real, and not just a dream. The process is interrupted by a quake that rocks the sea station. Aquaman checks outside and sees that the water around the station has turned solid, but is being ripped apart by tidal action. He breaks through its hard surface layer and discovers that the water below it is liquid. Aquaman summons whales to steady the sea station and rescues a helmeted diver trapped in the solid water. When he gets the diver back on the surface and the diver’s helmet is removed, Aquaman is astonished to learn the person’s identity: Mera.

Retrieved from "https://heykidscomics.fandom.com/wiki/Action_Comics_Vol_1_536?oldid=1673231"
Community content is available under CC-BY-SA unless otherwise noted.