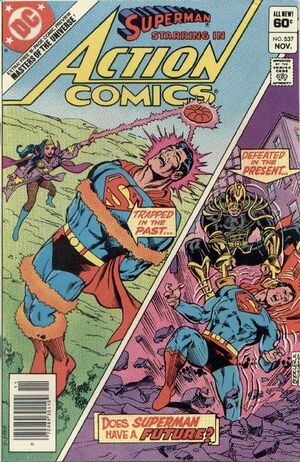 Appearing in "Half a Superman!"Edit

Synopsis for "Half a Superman!"Edit

Superman finds he is unable to go back in time and rescue his trapped past-half. Meanwhile, the Mole reveals to the world that Superman has only half of his powers, and a new villain, the Jackhammer, challenges the Man of Steel and defeats him.

Mera tells Aquaman that she is Lt. Miriam Bridgeman, and Adm. Murphy explains that Lt. Bridgeman joined them several weeks ago. Aquaman kisses her to find out if she is really his wife, and is satisfied by the response that she is, though she has no memory of being Mera...and the hard-water around the sea station convinces him further that she is really Mera. When she is hooked up to the brain-print machine, her readings come out garbled. As a final test, Aquaman has Lt. Bridgeman change into a bikini and leap into the sea with him. She finds out that she can breathe water and has telepathic powers, though she still does not remember her Mera identity. But when she tries summoning other fish, she and Aquaman are beset by attacking dolphins, and she mistakenly encases most of Aquaman’s body in hard water.

Retrieved from "https://heykidscomics.fandom.com/wiki/Action_Comics_Vol_1_537?oldid=1396904"
Community content is available under CC-BY-SA unless otherwise noted.