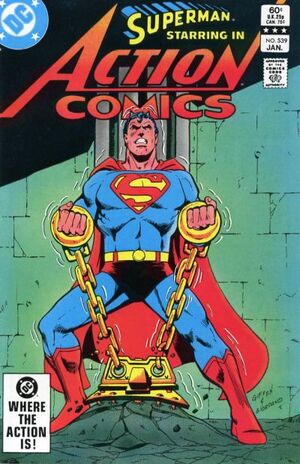 Superman A is unable to go to the past either through the Time Pool or on the Flash’s time-treadmill. Syrene draws the energy of the Runestone through Superman B’s body and kills both Supermen in the process. Lord Satanis inhabits Superman B’s body and continues the fight against Syrene, while, in the present, the autopsy on Clark Kent’s body has just begun.

Appearing in "Help! I'm a Prisoner in My Own Body!"Edit

Synopsis for "Help! I'm a Prisoner in My Own Body!"Edit

Even though Aquaman cannot bring himself to hit Mera, he has swordfish swim about them at such a speed it creates a whirlpool, dizzying Mera and enabling him to break her grip. She passes out, and Mera is thus able to override her captor’s dominance and send Aquaman telepathic messages. He learns that the woman in possession of Mera’s body now is Vlana, the woman who ruled her dimensional world of Xebel after she left to marry Aquaman. When Mera returned, she found Vlana unwilling to leave the throne, but removed her by force and incurred her wrath. Later, she lured Mera into a trap, and used her enhanced mental powers to take over Mera’s body telepathically. After that, she warped into Earth, assumed the Miriam Bridgeman identity, and infiltrated the S.T.A.R. project to learn how to communicate with fish, so that she could use them as “troops” to help her retake Xebel. Aquaman takes himself and Mera through the warp that admits them to Xebel. When she awakens, Aquaman fears that he will be facing Vlana again, but the crossing has returned Mera’s control of her own body to her. Mera leads Aquaman to Vlana, who now has fish-summoning powers and draws an army of octopi, sharks, swordfish, and electric eels through the warp to menace them. Aquaman is stunned by her telepathic strike, and Vlana tells Mera to choose which fish shall kill her.

Retrieved from "https://heykidscomics.fandom.com/wiki/Action_Comics_Vol_1_539?oldid=1396906"
Community content is available under CC-BY-SA unless otherwise noted.