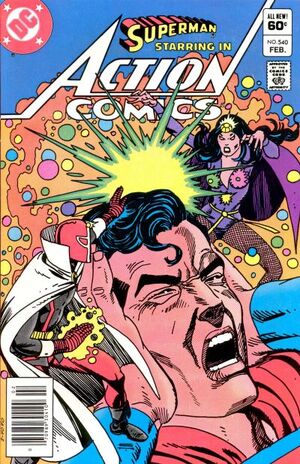 Appearing in "World Enough And Time"Edit

Synopsis for "World Enough And Time"Edit

Clark Kent comes back to life on the autopsy table as a result of his past-half being reanimated by Lord Satanis. Superman A goes to Rip Hunter and finally succeeds in using Hunter’s time-sphere to return to the era in which Satanis and Syrene are battling, at the point in which Satanis has apparently destroyed Syrene.

Mera and Vlana engage in a vicious hand-to-hand fight, though Vlana cheats by using members of her fish “army” to attack her rival. To prevent the interference, Mera creates a sphere of hard water around herself and Vlana, keeping out the fish. Then she and Vlana continue their battle, until the bikini-clad Mera finally defeats her. Aquaman breaks through the hard-water sphere a few seconds later, and an electric eel follows and kills Vlana with its charge. Mera tells Aquaman that Vlana must have committed suicide by ordering the eel to shock her when she realized she would be defeated. Later, back in her regular outfit, Mera once again gives up the throne of Xebel to return to Earth with Aquaman, the man she loves.

Retrieved from "https://heykidscomics.fandom.com/wiki/Action_Comics_Vol_1_540?oldid=1396907"
Community content is available under CC-BY-SA unless otherwise noted.