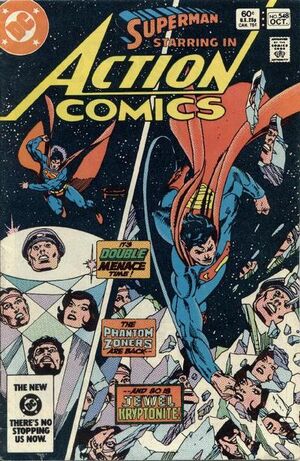 I'm all for giving complete coverage to Superman's feats... but unfortunately, not even the Metropolis Marvel can be everywhere he's needed! The city still has a serious crime problem on its streets...

Appearing in "Escape from the Phantom Zone!"Edit

Synopsis for "Escape from the Phantom Zone!"Edit

A group of aliens known as the Vrangs land on a floating piece of meteor space debris. Analyzing it, they discover that this debris was once part of the planet known as Krypton. Further, they find evidence of a ruined community, Argo City – the birth-place of Supergirl.

On Earth, Superman flies to Jewelry Row in Metropolis where he scoops up the world's largest synthetic diamond. The compounds within have become unstable and threaten to explode. Superman compresses the diamond matter to a more manageable size and hurls it into outer space.

In the Phantom Zone, General Zod and a group of his cohorts come across a floating piece of Jewel Kryptonite. Scientist Jax-Ur has past experience with this bizarre mineral and the criminals use it to focus their mental energies and produce corporeal bodies for themselves. They escape from the Phantom Zone and head to Earth.

Later, Clark Kent is assigned to interview an organization known as the White Wildcats. The Wildcats are an urban activist group that have taken to protecting the slums of Metropolis. During the interview with the Wildcats, Clark discovers that the hi-tech outfits they wear are based on Kryptonian design.

Retrieved from "https://heykidscomics.fandom.com/wiki/Action_Comics_Vol_1_548?oldid=1506455"
Community content is available under CC-BY-SA unless otherwise noted.