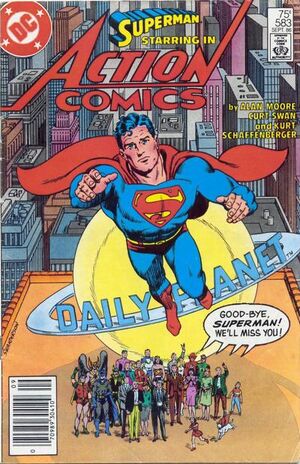 Appearing in "Whatever Happened to the Man of Tomorrow? Part Two"Edit

Synopsis for "Whatever Happened to the Man of Tomorrow? Part Two"Edit

As Superman is seen melting down the giant key that opens up the Fortress of Solitude, Brainiac/Luthor shows up somewhere near the fortress when they are joined by the Legion of Super-Villains, offering their help to defeat and destroy Superman. To that end, Brainiac/Luthor erects a force field that prevents any other superheroes from the outside to help Superman. Also, the Kryptonite Man's deadly radiation keeps Superman and his dog Krypto at bay from attacking them.

Seeing that Superman needs help, Jimmy Olsen and Lana Lang equip themselves with the powers they had when they adopted superhero identities, transforming themselves into Elastic Lad and Insect Queen as they take on the group of villains outside the fortress. Luthor has Lana kill him so that Brainiac would no longer have any control of him, but the Legion of Supervillains quickly destroy Lana afterward. Jimmy comes to avenge her death, but Brainiac resumes control of Luthor's body long enough to kill Jimmy and to launch a missile that rips a gaping hole into the fortress. With the fortress breached, Kryptonite Man enters, seeking to kill Superman, but Krypto attacks and risks his life to kill the radiating villain.

Superman carries Lois Lane and the trophy with him when he sees the Legion of Supervillains inside his fortress, gloating about the deaths of Lana and Jimmy. This makes Superman angry enough to attack them with his heat vision, causing them to retreat and return back to the future. Outside the fortress, Superman sees that Brainiac's head is losing control of Luthor's body as it succumbs to rigor mortis and detaches himself from it, vainly trying to crawl its way toward Superman before it goes completely dead.

It is at this point that Superman begins to consider that somebody must be behind all the villains turning against him, and so calls out Mxyzptlk's name. He appears unto Superman, revealing that he has grown tired of becoming a mere nuisance and is now deciding to become fully evil. Mxyzptlk also starts to change from his harmless impish self to a hideous dark creature intent on overpowering Superman enough to kill him. Superman then looks at the trophy, realizing that its Superman figure is holding a Phantom Zone projector, and so goes to get the Phantom Zone projector to use it on Mxyzptlk. As he activates it, Mxyzptlk speaks his name backwards in order to return to his home dimension, but finds himself being pulled into two different dimensions and screams as he is being ripped apart.

Realizing that he has just broken his own moral code to not kill, Superman goes into the Gold Kryptonite chamber to strip himself of all his powers as Lois Lane sadly watches on. With the force field Mxyzptlk kept active now powered down, the heroes outside the barrier enter the fortress to find dead bodies of all of Superman's friends except for Lois, Perry White, and his wife, still being alive. They see that Superman has departed from the chamber through a secret passageway and is now wandering outside in subzero temperatures where supposedly he would die.

It is at this point where the story closes, with Lois Lane Elliot telling the reporter that any possible rumors of Superman still being alive after that are not likely to be true. As the Daily Planet reporter departs, Jordan Elliot brings their son Jonathan into the living room, where he plays with a piece of coal that he turns into a diamond. He and Lois both decide to relax with a pizza and a bottle of wine, and as Jordan turns to close the door in the last panel, he slips the reader a wink.

Retrieved from "https://heykidscomics.fandom.com/wiki/Action_Comics_Vol_1_583?oldid=1396951"
Community content is available under CC-BY-SA unless otherwise noted.